Movies and TV series are not a great source of entertainment only! They can teach us about life, and at the same time, provide us with educational information. We are all aware that STEM careers will be in demand, and a way to get young people excited about this field is by watching related movies and TV shows. Below you can find six STEM movies and TV shows everyone should watch. These movies and series not only preach STEM-related knowledge but also depict other related issues.

The film revolves around two athletics assistant general managers who form a great baseball team using statistics. Watch this film to see how mathematics transformed the entire selection process, how it can be applied in our everyday lives, and how pursuing maths could be a possible professional path in the least expected places. This movie has incorporated math in a meaningful way.

This space odyssey tells the story of two astronauts Ryan Stone and Matt Kowalski, during a spacewalk to service the Hubble Space Telescope, which gets hit by the debris of the Russian missile strike on a defunct satellite. They lose all kinds of communication with the earth. It’s an exciting and visually appealing movie that is bound to get you hooked. The film “Martian” tells a similar story.

Christopher Nolan’s Interstellar follows the journey of a group of astrophysicists who travel through a wormhole in space in an endeavor to search for a new abode for humankind. The protagonist is a former NASA pilot who leads his crew and travels to a planet where no one has ever set foot before. This movie shows space travel, wormholes, Einstein’s relativity, space-time curvature, singularity, and gravity as the earth and humanity are on the verge of extinction. One feature of Einstein’s relativity theory is that time passes slower in higher gravity fields. So on a planet orbiting close to a black hole, a clock ticks much more slowly than on a spaceship orbiting farther away.

The whole show revolves around high-IQ but socially awkward male scientists and their less intelligent (though more commonsensical) female neighbor. During later seasons, Big Bang Theory brings in Amy’s character, a neurobiologist as brilliant as protagonist Sheldon Cooper and Bernadette, a microbiologist. Even better, Amy was played by Mayim Bialik, who has a Ph.D. in neuroscience. This sitcom is culturally notable for showing the everyday life of four men with careers in the sciences.

Black Mirror is a dystopian sci-fi anthology series. The show mainly explores a twisted, high-tech near-future where humanity’s greatest innovations collide. Black Mirror sheds light on the negative effect technology can have on everyday human lives. All the episodes refer to a dark modern world. But a lot can be learned from this genius of a show. Overall, this show is excellent, entertaining, and intellectual.

Halt and Catch Fire is led by two women and portrays the personal computing revolution and development of the World Wide Web in the 1980s and ‘90s. This series revolves around a crackerjack computer engineer plus ace businesswoman and a programming prodigy and video game designer. This show puts its female characters from diverse STEM backgrounds front and center. Along the way, the women encounter sexist attitudes. But, they refuse to let anything slow them down.

Give these movies and shows a watch if you haven’t already. They will surely ignite a curiosity to learn more about STEM knowledge in you while you have a great time watching them whether you belong to the STEM-related fields or not. 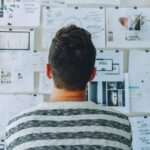 Previous story :How to Control Daydreaming and Get into Action

Next story :Success Stories of women in STEM

A Prose of Confidence

Once you decide to fight back and go forward in life, follow these steps to boost your confidence.

3 Ways To Deal With Your Imposter Syndrome

Self-doubt and lack of confidence while being qualified to accomplish the job you've been given are common, especially in new circumstances. However, if you feel inadequate even when you succeed at your particular profession for an extended period, you're suffering from imposter syndrome and here're 3 ways to fight it back.

Give yourself a Break

Give yourself a break to overcome any changes in our constant life and make the best out of them.

Why Is Elizabeth Bennett A Role Model?

Let's know about Elizabeth Bennett, famous character from the novel "Pride and Prejudice" and reasons of her being a role model.

Pretotyping: The Step Before Prototyping

If you have an idea for something, be it a business, mobile application, or a device, remember to create its pretotype first. Pretotyping answers just one question for its users: “Is this the right thing to build?”