We live in a world where distractions are abundant, technology is always at our fingertips, and web series and games are always at hand. While there is nothing wrong with that, it becomes a problem when it distracts us from what we want to do. As Dr. Glenn Wilson stated, “Even the mere temptation of an unread notification on your phone decreases your effective IQ by ten points while you’re attempting to complete a task. Even a minor temptation, such as an unread message, might hinder your capacity to think effectively.”

Is Willpower Holding Back Your Productivity?

Keeping these things in mind, you may have become a procrastinator, deferring essential tasks even when you don’t want to. However, if you are self-conscious about your self-growth, you would’ve decided to prioritize your to-do list by employing your willpower energy to do each of your essential tasks.  It’s defined as a delayed clarification in which you treat yourself to your favorite forms of entertainment as a reward for completing each of your quests. For example, you may usually treat yourself to an hour of your favorite game or a single episode of your favorite sitcom as a reward for completing one of your academic assignments.

Now, what if I told you that even this strategy isn’t as effective as it appears? Instead, you won’t be able to achieve the level of productivity that you had hoped for by the end of the day. To understand the scenario more clearly, I can provide the dilemmas I faced while I tried to apply this strategy. While I am doing my academic work, I always choose to play Valorant in the middle of the process. Unfortunately, as that choice is always available for me, it keeps me preoccupied and successfully leads me to procrastinate.

Willpower is a Limited Resource

Willpower is defined as the capacity to resist or control the temptation to engage in harmful and ineffective behaviors. It also enables people to make decisions and then stick to them until they are successful. Willpower may also help us delay gratification, which we’re hard-wired to crave right away as humans. People feel that if they had more incredible willpower, they could drastically improve their life. But, here is the fascinating thing, unfortunately, willpower is a limited resource, according to ego-depletion theory. So, the idea is that willpower is drawn from a limited supply of energy, where willpower is like a muscle, which is why you can tire it. Therefore, the more willpower you spend on something, the less energy you have to resist temptation, stay focused, or make the right decisions later.

An Experiment that Altered the Way We Think About Willpower

We even have an example to establish this theory where Roy F. Baumeister and colleagues conducted a famous experiment. In this experiment process,  people who hadn’t eaten in at least 3 hours sat at a table with two bowls where freshly made cookies were in one of the bowls. The other has radishes in it. One-half of the participants were instructed that they could only consume the radishes. The other half might eat the cookies. They then had the fortunate cookie people and the unfortunate radish people work on a puzzle. The puzzle was nearly hard to solve. The researchers were curious as to how long it would take the participants to solve the challenge. Their discoveries were fascinating. The problem was completed in 20.89 minutes by a control group. For 18.90 minutes, the cookie group. For 8 minutes, the radish group. It is evident by now that resisting temptations takes an incredible amount of effort.

How to Succeed Within Limited Willpower?

If you’ve made it this far in the article, you’ve already realized that you may have been thinking about willpower the wrong way in your life. So now, you may ask, what steps might you follow to succeed within limited willpower?

As Leon Ho in his article suggested, the myth of willpower is harmful because it encourages individuals to focus on short-term gain rather than long-term goals. Leon even added that focusing on willpower failures leads to public and personal humiliation and stifles innovation. “Rather than focusing on things that go in the way of your goals, focus on things that help you get there,” he recommends. The critical thing to know is that you must follow a system to reach your goals and dreams.

So put plans first and willpower second. If you’re attempting to concentrate on a task and your phone vibrates with an unread notice, switch it off rather than battling the urge to check it. If seeing chocolate on the table makes you want to eat it, put it somewhere you won’t see it. Better still, don’t buy them at all. It’s not a matter of having weak willpower; instead, it’s conserving as much strength as possible for subsequent temptations. Rather than exerting a lot of will, plan your day so that you use less willpower.

Use Less Willpower Rather Than More.

Throughout the day, we have a variety of choices. Should I do this or that, or should I just do this for a short time before moving on to something more productive? An easy way to reduce ambiguity and uncertainty and stop being distracted by them is to make choices that you don’t want to complicate or remove altogether, which you don’t consider an essential task. Use less willpower rather than more.

Previous story :Most In-Demand Master’s Degrees to Pursue in 2022 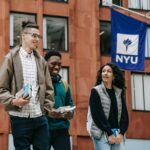 Some exciting international humanities competitions for high schoolers to explore

Here is a list of some hand picked competitions that are accepting applications right now. Choose wisely!

5 reasons why you should participate in international programs

International program is an experience unlike any other. I’ll tell you why.

Ideating the Future of Work: 5 Trends to Get Ready

The future of work will be more impacted by technology, which will shape the working habits and culture. Find out what formation awaits ahead!

We bring you some recent commencement speeches that will motivate you for sure.

This article presents some inspiring moments created by female athletes who have showcased their Olympic spirit and have paved the way for future champions!

Obama’s inspiring virtual commencement speech to the class of 2020

So, if the world is going to get better, it’s going to be up to you.